That is my opening line for this review. True to the word it is. Moon Cresta on the 48k Spectrum is a coin op conversion of an arcade machine released by “Nihon Bussan” better known as Nichibutsu (A japanese video game company). It is believed that the game is a hack of the very popular game Galaxian from Namco. 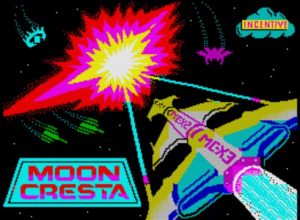 On loading the game on the Spectrum, you are subject to this Loading Screen which looks kind of cool for the day. The Spectrum release was released in 1985 by Incentive Software, same company that would later produce true classics such as Dark Side, and Castle Master.

It goes without saying, that the game was also on the Commodore 64, the Amstrad CPC and various other formats, there is no denying that of course, as these machines were competitors on the most part, just as modern formats are – but as this is the Spectrum Review, thats what I will concentrate on.

Once the tape loads you are instantly presented with this screen above, a traditional control method selection screen. Each option is defined with a splash of colour so everything doesnt blend in too much which is a nice touch. What is also a nice touch is the fact there is some nice graphical icons on to the right (even if a hammer to the keyboard is a bit scary, for the redefine keyboard controls choice). The start game shows a nice 10p coin slot, to remind us of the bigger brother – the arcade machine.

As mentioned earlier, Moon Cresta is likely a Galaxian hack, and as you play it you will almost certainly see that.  However a big difference is that the ship you control is a 3 sort of “tier” system where you link together and as you lose a life you also lose part of your ship.

The best example I can think of demonstrating this is to show this graphical representation, which is how you start off the game with all 3 lives – and each time you play a level you use whichever one your player is currently at. For example if you have lost the top one, you will play as the second one etc until all three are destroyed.

A really awesome feature of this game, is the docking segment. Similar vein to Thrust and games where you use thrust to keep gravity from decreasing too fast you can gain points by successfully redocking with the ship you seperate from. Darn awesome from a game this old! 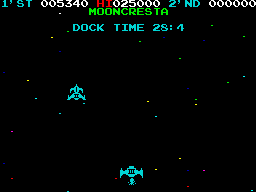 The game is difficult, but I recommend it, for anyone who has never played it. If you like Galaxian, Space Invaders, any shoot-em-ups like that, you are going to likely love this.

What better choice to choose the Spectrum? – as the game is pretty much arcade perfect on the humble Spectrum. Incentive software did a really good job with the conversion, the 48k beeper sounds great the animations are fluid between levels, even the enemies do a little dance when you are destroyed. Recommended.

This site uses cookies to enhance your browsing experience. Find out more.